some photos from childhood

have not got to many photos from childhood,though in some ways thats a good thing.
almost all the family photo albums are of sister growing up to not surprisingly.

here are some that have scanned on,and cropped in GIMP to cut other people out or keep res down. 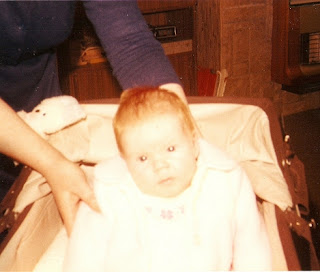 as a baby,though that shoud be obvious to anyone whom has sight.
have actualy got one memory of being a baby,and that was being in one of those baby bouncer chairs, woud constantly rock that thing,cant be certain for definite it has come from self and not the photos of self in the bouncer though but can actualy remember the feeling of it to,and being in another bouncer which was like dungarees attached to the door frame and was red,dont have any photos of that and mum has said we did have one,she doesnt believe can remember from being a baby but have not exactly got a normal memory [savant long term memory and non existant short term memory which is probably the payoff]. 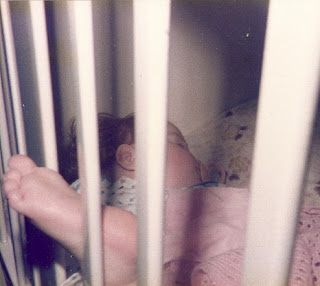 this was mentioned in the first post on this blog,for some reason have always slept with foot sticking outside the bed like that and still do so,obviouslt its a routine but dont know what made it felt right in the first place.

was never one for posing and still not now-will never understand the whole thing of acting like are doing something when are not actualy doing it,however-sister was stood doing exactly that in a nurses costume next to self,not going to post her photos here-not her dodgy ones that she whinges about every time the inlaws want to see them when they visit anyway.

people usualy got attention to look in camera direction by waving their hands in front of the camera,then blinding with the bloody flash.
in this photo the area am in is the hall.
this was one of sisters play areas where she had a lot of toys spread everywhere as well as herself.
a routine of mine was lining things up and every day was a fight between us-lining her stuff up, her messing it up [though that was how she liked it but did not have the understanding then to know that],meltdowning and attacking each other and trashing her stuff,being hit by dad,lining her stuff up,
repeat.

the dummy [will see one in hand] is something that lasted from birth till high school,day and night-it only stopped due to teachers/mum and dad.
have guessed it was both a routine and sensory thing.
as an adult,was told by the dentist that had only a slight overbite.
lots of people warn against letting children use dummies at all because of damage to teeth,but had used mine all the time and only got a slight overbite out of it which did not need any treatment and they have always been easily damaged due to the fluorosis [the medical term for teeth fucked in childhood up by fluoride] so if they were going to get fucked up they woud have done-so am not a great believer in that one unless its just different for everyone. 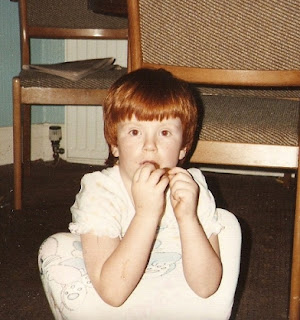 this was a favourite spot to sit in the house or under the table which is behind these chairs.
woud put legs inside nightdress,soles of feet touching each other and rock-often woud be banging head off the back of the chair.
am practicing something else in this photo to-pica,it was very severe back then and nothing was off limits,in the photo am in the middle of swallowing coins off the floor.
still have pica now though its gone right down ever since coming into the autism organisation am with now. 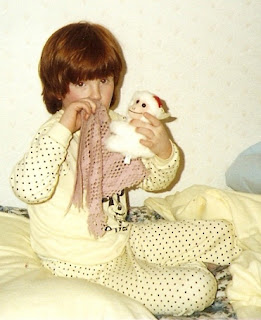 like the dummy these are other comfort and sensory things that had used around everywhere.
the pink blanket was because of its scent and feel on hands and face,the teddy had at one point had lots of suction cups on the paw bits but had bitten those off,had loved the feel of it and loved carrying it close to face. 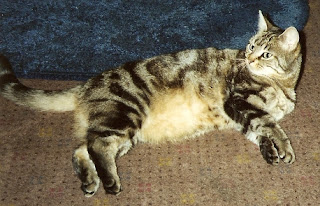 this was the first ever cat had ever had [read the first post for more information], twinkle.
still totaly miss her even though did not understand her in the same way that understand cats now.